New faces are popping up in Episode 6, and not all of them are friendly.

Meet Wren Carrel, Zovack's second-in-command. As the new King's right hand, they're not going to be happy about what's happened on Orion, and they seem to know a lot about the crew... perhaps too much. 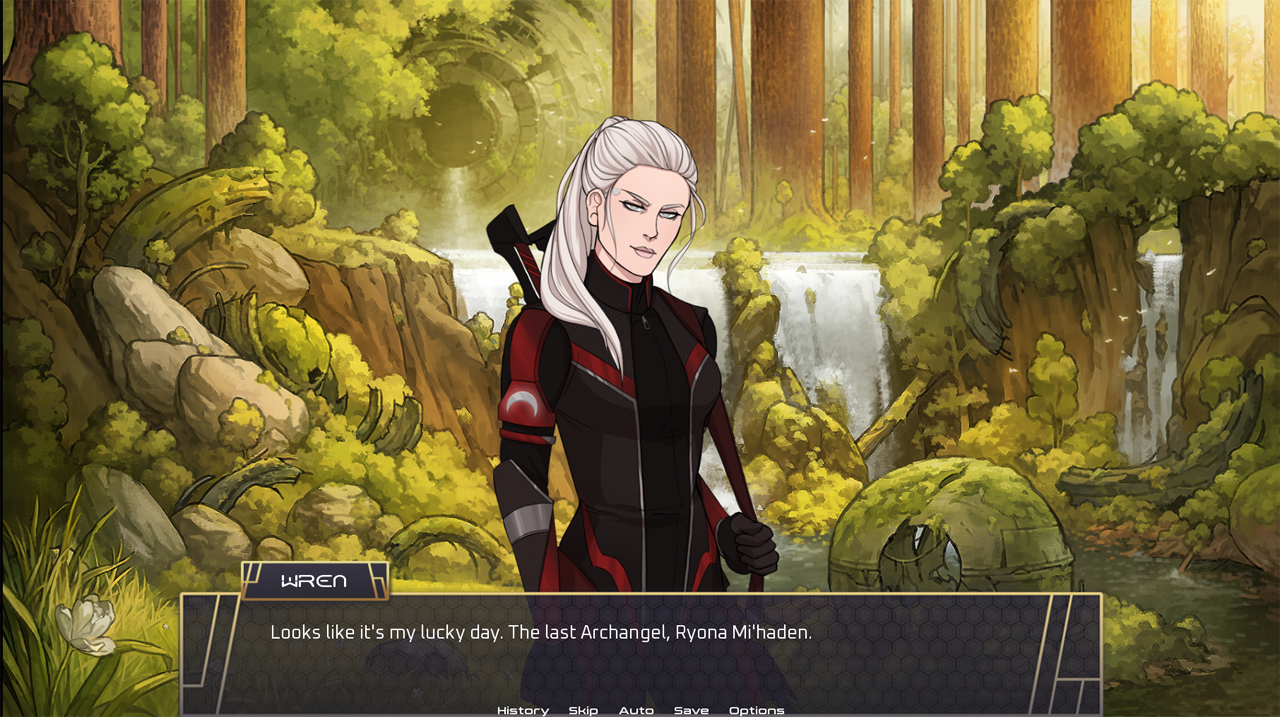 downloaded it but the game still ends after vex gets shot :(

yes... because more of the game currently isn't released.

sheeesshhhhh they're hot tbh BUT! ain't no way i'll ever like them for what they did to my beloved vexx !!

oKAY BUT THE NON BINARY REP IS GREAT

if thats the person who shot Vexx, they better be prepared cuz im gonna trow hands

I don't care how pretty they are, they shot my Vexx. It's ON!

They did check Vexx's clearance ---would B very easy for someone 2 learn he failed in his mission & order his termination.

They’re now on my murder list. 1) for shooting Vexx (How dare you!!) 2) for trying to shoot me(MC)! I’m too cute to be killed. Plus my OC is even cuter than me. They do be Kinda fine tho- but still! YOU SHOT VEXX! Angry Smol person noises

Poor Vex.. but like let Wren step on me

Don't care what they look like, if they are with Zovack and pose a danger to MC and the crew, they can burn in hell for all I care.

Before they introduced Wren and Vexx got shot I was like: Ok who's going to die today- then it just stopped. Now I’m like: LEMME AT 'EM lolol

I’m a little disappointed that Wren is our first character who uses they/them pronouns. I think the alien person might have but that’s not really great either 😅

The MC can be a They/Them and Oppo(I think that’s how their name is spelled-) is a They/Them. Plus it’s possible that more ppl who use other pronouns than He/Him/His and She/Her/Hers are going to pop up (^^)

(spoiler alert) can I bet? cuz I am betting they are the one who shot vexx and considering they zovack second in command then they probably shot vexx for betrayl maybe? but then again how tf did they get to orion so fast? maybe they were already there but for what reason?? so manyyy questionss

plus I might just throw a theory in, maybe after vexx was taken by the crew, the unit that was supposedly following vexx's order to follow the ship knew that he was taken and reported back to zovack or whatever so when vexx and the others were waiting for permission to land on orion, mez the baldie either reported that vexx is on the ship or maybe when he was just asking for permission to let them land somebody else (who works for zovack)  was there or just somehow learned that vexx was there and sent people after him and that's how wren ended up there?

anyways all the best of luck to you on the next chapter! can't wait to see it :D

Wren was aiming for the MC, and Vexx got in the way.

If you choice someone other then Vexx, he appears behind the MC to block the shot. If Vexx is the one you choose it would be easier for him get in the way. It's clear that Zovack, and thus his right-hand, would see thugs like Vexx as disposable. But more than likely Wren would know what the MC looks like; to pull off all the hits on the royal family efficiently. I'd guess as soon as they saw the MC they wouldn't hesitate to try and kill them. I could be wrong of course, but from a narrative stand point it would be more impactful for Vexx to block the shot than to be the target. It would lead to conflict on whether it changes the MCs stance on forgiving him or not.

ohh right I didn't think of that! thanks for sharing tho!

Ahhhh omg so excited for this!! spent over 4 days straight playing the game and I just finished it and I am really so excited for whats coming next!!! plus damn wren be looking fine as hell, I might just simp-

the awkward moment when your MC is also named Wren...

What tf are the chances I picked a name a later villain in the story? Excited to see how things play out with this new addition and what comes next!

I had this happen in another visual novel a while back too - and it wasn't even a common name either! Frankly I was floored, and had to restart the game cos it made me not feel special anymore. lol

Sometimes my OC is like a clone of character that my OC meets and it’s super weird. Like I can predict S__t like that, it’s creepy.. -._-.

Guess what: I named my MC 'Orca' in another visual novel and later it mentioned an ORCA which stands for the Ocean Restoration: California Affiliation. Pure coincidence, but interesting enough.(You can probably guess which VN it is by now XD)

They're going down for hurting my baby lmao. but amazing character design as always!!

their character design is awesome!

Wtg introducing a character I immediately want to kill because of what they did to my guy! lol. He better be okay, too - I gotta be able to nurse him back to health (again). <3

I'm gonna go out on a limb and assume they're the one that shot you-know-who which means my Royal is gonna f them up! Or, more likely, cry while the rest of the team f's them up, lmaoooo.

Bring it! My boys and my prince will take down anyone! Specially is they were the one who shot our baby, Vexx. =P